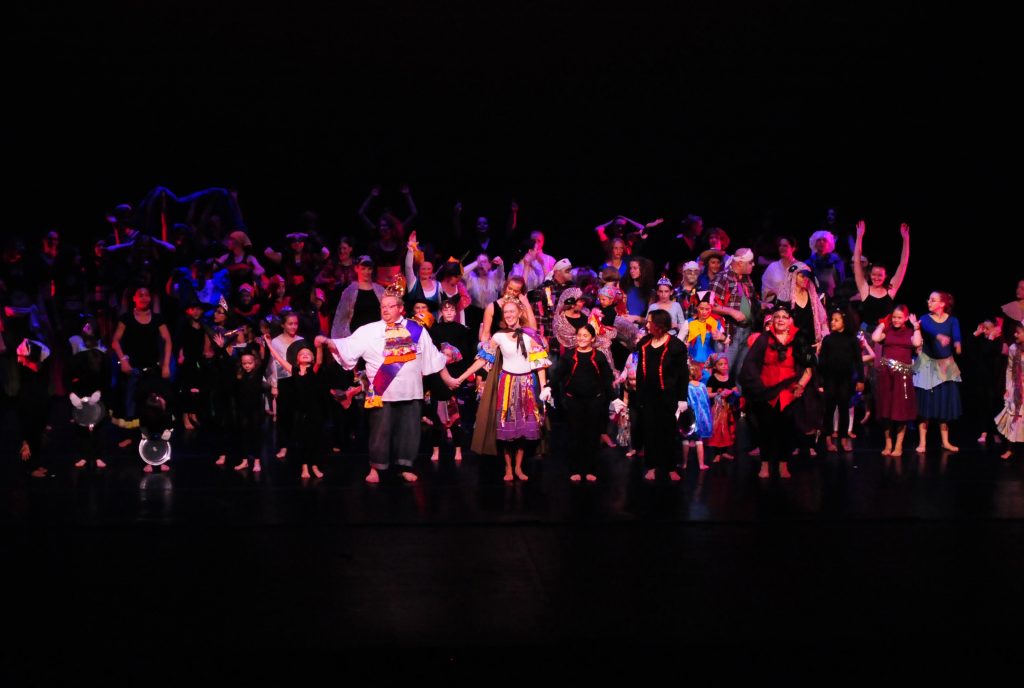 “Ms. Liz, Ms. Liz,” I feel a light tapping on my shoulder. “There are tornado warnings. Parents are getting worried. We need to move the kids to the basement.” It was June 1998 and we were in the studio doing a critical full concert run-through of Grandma Twilights Secret. It was a very prop heavy show with rakes and brooms meant to scare away all the dirt, grease, grime, dust balls and spiders that had invaded the castle after Grandma Twilight, the master cleaner, had become sick.  There were 80+ performers coming together for the first and last time before we headed to the Arts United Center for technical rehearsal. We had major details and transitions to create and tornado or not, I was pushing through. Ok, yeah the winds were strong, the clouds were dark and by the third tap on my shoulder, I gave in and we all headed to the basement in the Hall Center. It was pretty crammed down there, but the kids made the best of it looking at all the fun costumes and props we had stored down there.

This was the first time that a tornado got the best of me.

I recall driving to the theatre in June 2010 for the performance of The King’s Curse, confident that I had calculated all possibilities and certain that it would be a perfect show. However, I had not checked the weather forecast.  The show ended on cue with a great “ta-dah!” We then had a fabulous choreographed bow planned, but from stage left I instead saw the curtain coming down! What? No! No curtain here! Then an Arts United attendant approached me and said we had to end the show. There were seven (seven!) tornados (ok, I think they were “funnel clouds”) on the radar and we had to get all performers off the stage and into the basement. The audience would remain seated, as the auditorium was the safest place in the building. The stage was the most dangerous. Our hope was that we would be in the basement maybe twenty minutes and then we could do our fabulous bow. It was not to be. We kept watching the radar and after about an hour we saw a little break to get everyone safely out of the building and send them home. What a sorry closure to a great performance. But it was one show that everyone in attendance will never forget! I was told to be careful what I named these stories. The Kings Curse indeed, with Mother Nature’s Nightmare the year before.

Way before these major productions we did small end-of-the-year programs called “Show and Tell.” They were informal and had the feel of a lecture-demonstration. We were still in the mode of educating our audience about modern dance and how we were different from commercial dance studios. No glitz, no feathers, no sequin, and certainly no recitals.  Creativity and inclusion was our primary message.  We were peddling dance as an art form, not necessarily as an entertainment form. As our student numbers grew, we became more confident and began to lengthen the programs. We also created short stories and included more professional pieces created by local dancers and teachers. We had enough material for an intermission! We included amazing pieces created by the CAP on Violence team which included puppetry, poems and drumming. As those programs diminished, our June concert morphed into one long story. The Choreographers Lab performances filled in the gap for other progressive pieces to be produced.

As the June concert began to be focused on one story, my major co-producer was creative movement teacher Becca Wegner. All the teachers were involved with choreography, and for many years Lisa Tsetse was a major contributing writer. But it was Becca whom I would spend hours with at her kitchen table pouring over music selections, figuring out which class would do what, and filling in the holes of transitions between pieces. The next layer would involve costuming, props, lighting etc.  It always amazed me that as early in the year as November kids would ask “What’s the story this year?” I would usually say “I have no idea, what would you like it to be about?”

The stories would simply come out of my own experience. My beloved dog passed away and that created The Lost Balloon. I met a three-year-old in Seattle who was obsessed with numbers, which became The Boy Who Wanted to Count. Most memorable was The Sisters of Blueleaf, after the destruction of the trees along the river across from the studio which we watched from our office windows. This was the only story we did twice. I guess I wanted to see what that felt like and it was not satisfying at all. I missed the process of figuring things out.

So, I could write a book on my experiences with creating and producing Fort Wayne Dance Collective’s June concerts. That’s all for now, but stay tuned for more. I am glad to see how the organization continues to focus on our fabulous mission. The June concert will continue to be an expression of those involved and although we need to miss this year’s experience, it will be reborn next year and I’m sure it will be amazing . . .even if there are tornadoes.