Taiko in the Time of COVID

Taiko in the Time of COVID 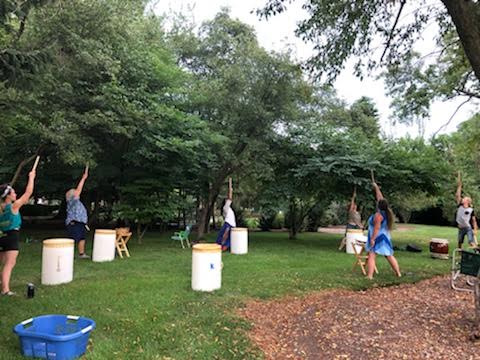 She was laughing. “In the middle of the song, a worm crawled across my right foot and then moved across my left!” Fort Wayne Taiko drummers were playing outside at a local park under shade trees. In keeping with taiko protocol, most of us were barefoot. She shared her worm story and we slapped at mosquitoes and positioned and re-positioned ourselves and instruments in and out of the sun…. so many unique opportunities to practice focus!

We weren’t performing. The adventure of playing taiko in the midst of COVID isn’t about performing. I wouldn’t even really call what we do a rehearsal. But we are playing. And we’re grateful. We’re grateful to make music. Together. We’re grateful to be healthy and well. To be alive. We want to feel connected AND we want to be safe. So we drum outside in the heat, six feet apart with bugs and worms.

We haven’t drummed in the studio since mid-March. When COVID hit in the spring, we Zoomed weekly just to stay connected. Once the weather warmed up, we began gathering outside, weather permitting. We’ve played in my front yard several times and have drawn a small group of witnesses. Neighbors I only knew by name now know me as a drummer. People arrive on bikes from nearby neighborhoods, drawn by the deep voice of the taiko. And of course, cars stop to see what’s going on as they happen down my residential street.

We don’t announce ahead of time because we don’t want a crowd. We want people to socially distance and we’re very aware that we aren’t playing particularly well. Since our entire ensemble is not there, we are playing parts we don’t know. And we are playing those unfamiliar parts on plastic practice drums instead of our beautiful wooden-barreled drums. Skinned one end only and designed to sit vertically without a stand, the plastic drums are great for outreach programs, but not so great for practice. We’ve tried putting the drums in various lawn chairs to get the angles needed to play in preferred horizontal and diagonal positions….I can’t say it works very well. Not only are we distracted by the heat and bugs and worms and falling-over drums, we are wary of COVID.

As a committed ensemble, we consider and discuss the lifestyle choices we each make outside of drumming. We disclose risks of exposure and physical symptoms. We learn new parts to compensate for drummers who aren’t comfortable gathering in person. Songs that were choreographed to be played by two people on a single drum, we now play six feet apart. We allow for missing people. We allow for missing instruments. We allow for missing polyrhythms. We allow for differences in opinion. We reconfigure. We’re smart. Adaptable. Resilient. Creative. We take care of each other. We’re taiko drummers.

We canceled our 20th anniversary show scheduled for October 2020. We were disappointed, but relieved. Taiko is hard; it takes practice. We are painfully aware that our rehearsal time has been ravaged. COVID taiko is not about preparing for performance. We are not perfecting repertoire or polishing technique. We play taiko in the midst of COVID because it feels good. Because it’s fun. Because we love each other. We don’t play for an audience; we play for neighbors and passersby and people walking their dog. We play to celebrate being alive.